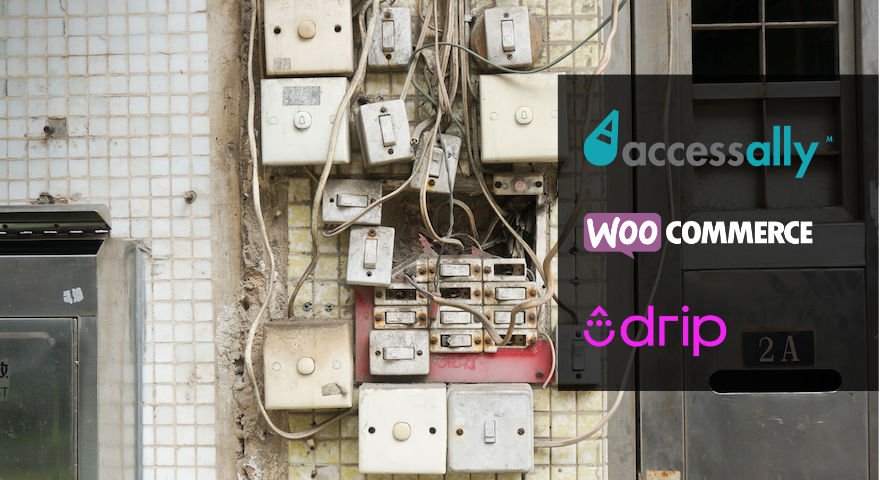 I write this so that it can help another person save hours of time, money and sleep before considering AccessAlly with WooCommerce and Drip combo for their membership site. I do this as a last resort after spending months of development time plus precious money buying all the plugins needed for this project and getting no support from these platforms.

[Update 1: AccessAlly’s founder Nathalie Lussier replied positively to my share of this article on Membership Mastermind facebook group. I am thankful to TheMembershipGuys for helping me use their group to voice my concerns. I have included further updates below.]

The client was already using WorldPay for their existing membership site subscriptions – one of the worst outdated payment processors in the world in my opinion.

We had built a lead-generation site for the same client that integrated with Drip and were very happy with the Drip platform. So we wanted a membership platform that would work with Drip as well.

So finally we wanted a membership software platform that can work with Drip and work with WorldPay’s FuturePay platform.

[Update 2: Apparently aMember supports WorldPay out of the box according to a comment I received from the facebook group post. I verified on their website that they do. But we would have not chosen aMember because we really needed a tag based system like AccessAlly or Memberium as we wanted some custom features designed using tag automations]

And we found that WooCommerce had a plugin to accept payments from WorldPay’s FuturePay subscription system.

While we were considering various options for the membership website, the marketing head of the client’s company had heard of AccessAlly and was impressed. She wanted us to consider using it, as it seemed like the best option out there for their needs.

I digged around their documentation and they had various articles on how it works with WooCommerce. They also assured that we can get AccessAlly to work with WooCommerce and Drip combo using another extension from WooCommerce.

Now we had the following plugins

Smooth Start In the Beginning

At first things were reasonably smooth. AccessAlly’s setup was straight forward, and everything in AccessAlly was controlled through tags on Drip.

In the beginning of the purchase of their plugin, we had direct content with Robin, AccessAlly’s lead developer. She would answer our questions diligently and we felt great receiving support and strategic advice.

(You can click on images below to see full screenshots)

We start building the new membership site. Our plan was to finish the content, membership levels, individual products and then finally work on payment systems. The last step was to import their subscribers from their existing custom made membership site built on Django.

When we started to work on payments things started going bad.

How AccessAlly’s Support Didn’t Care After Onboarding Us

Now apparently “WooCommerce For Drip” plugin does not create a user in the Drip backend, unless they exclusively check a box on the final payment page which adds them to a drip campaign as well.

So if a user makes a WooCommerce Subscription purchase for a membership and accidentally forgets to check a box (which cannot be made mandatory), then even after purchase they simply cannot login to AccessAlly. Simply because everything in AccessAlly is controlled through Drip and its tags. There was no record of the purchase on Drip, not even their email was added.

Disappointed after spending more than a month to build everything, we reached out to AccessAlly’s support. Only now, someone else answered when we reached out to Robin. To us it seemed it AccessAlly’s onboarding was great, and then they simply automated our support requests to some other developer (Erika) who said I needed to contact WooCommerce and they would help us out.

I had to reach out to WooCommerce again, and the reply was a simple one line – “Users will not be added to Drip unless they check the box”. I explained them how we don’t need them added to any campaign, but they simply repeated the same answer.

Disappointed I went back to AccessAlly’s support. And this is what I received.

Needless to say I felt abandoned. I persistently followed up. Simply because now they were simply playing blame games now.

What really bothered me is this – Erika’s reply says, “we can only make promises on what AccessAlly can do”. How is an article on their own website which clearly says it works with WooCommerce and Drip “not a promise”?

This was simply, for a lack of better word – STUPID and seems like their AVOIDANCE FROM TAKING RESPONSIBILITY.

After all the let down, we had to hire a WordPress plugin developer to create a custom plugin patch to fill the gap of adding users to Drip after a purchase. This was never part of the budget and we had to take hit on the expenses after all the headache.

After a week or two passes by, we are almost near the completion of all contents and payments. We finally test the cancellation flow of WooCommerce Subscriptions.

Then we realized, there is no mention of this anywhere. If a customer cancels their subscription, while they stop paying, they will still be able to access everything on AccessAlly.

This is because none of the plugins AccessAlly’s article recommended even deal with cancellation flow. So no tags on Drip are removed, and hence AccessAlly lets users access membership content even after they stop paying.

THEN IT HIT ME, none of their knowledge base recommendations were tested by AccessAlly’s team, EVER or considered for real world usage. Because how can something as trivial as cancellation be not even thought of?

It was simply a way to sell. Because that seems like the only focus at least from where I stand.

How Do We Move Forward?

At the time of writing this, the only way to move forward seems to be hiring another developer again for the cancellation flow. Its going to cost a lot for custom development and we had never quoted this to the client because all these companies promise us out of the box behaviour.

It sucks that no one wants to take responsibility for the functionality and are simply keen to sell.

For instance, even after all of this, AccessAlly has not. (Update: Feb 6, 2021 – I noticed some traffic to this article. I went back to their KB article and happy that they are finally transparent about the limitations. I do feel good about pushing them to do that *wink*) Also I left an objective review on the specified WooCommerce Extension about its shortcomings and it was never approved by WooCommerce as they control the reviews on site.

[Update 3: Nathalie Lussier, AccessAlly’s founder promised to update their KB article about the reality of using it with WooCommerce and Drip, it was comforting to feel heard and getting assurance from their founder that they care]


Concluding thoughts: While I am a user/developer of WordPress and its ecosystem, I am kinda starting to see why there are platforms like Shopify, Kajabi, Teachable, Squarespace etc which some people prefer to avoid a lot of headache with “plugins hell”. At least with these platform, while they do make you dependent on them, they take responsibility.

Please log in again. The login page will open in a new tab. After logging in you can close it and return to this page.